Carnivals were originally associated with the Catholic Church and celebrated during the season before Lent called Shrovetide. It was a festival that aimed to unite the local society, when there were usually parades, and the participants wore costumes and masks.

Sudbury Ephemera Archive (‘the archive’) has several booklets/programmes printed for these events. 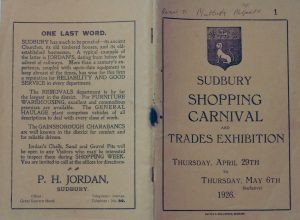 In 1926 the carnival was focussing on promoting commerce in the Town and took place between Thursday April 29th and Thursday May 6th. Today we might think that this event was taking place around May Day weekend and a Bank Holiday but it was almost half a century before the UK had the luxury of a May Day Bank Holiday. The booklet contains lists and adverts for Sudbury retailers, a competition for school children and a short description of the industry of Sudbury. As with later Carnivals the local shops decorated their windows for the occasion and the school children were invited to vote and write why they thought a particular window was best. The prizes were 10 shillings and 5 shillings. On the cover of each booklet is a number for a lucky draw entitling the holder of the winning number to a prize. 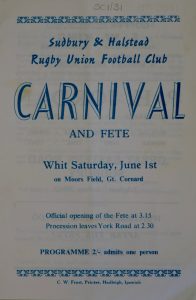 Carnivals were revived in 1965 by the Sudbury and Halstead Rugby Club, with funds raised from that year being used to build a clubhouse – by 1968 building had begun.

This information is found in the introductory statement inside the 1969 carnival programme but there are some anomalies relating to the  band which seems to have been disbanded in 1967 and the 1st of June was not a Saturday – it was a Sunday in 1969. The 1969 carnival programme is held by the archive, it cost 2 shillings and is a much slimmer booklet than the 1926 version, although there are adverts for local firms sponsoring the event. The carnival procession left York Road at 2.30pm to parade to Moors Field, Great Cornard where a fete was held and opened at 3.15pm. There were 9 categories in the procession and judging began at 1.30pm. Entertainment was provided by the Suffolk and Cambridgeshire T.A Band, Professional Wrestling and American Style Tag. 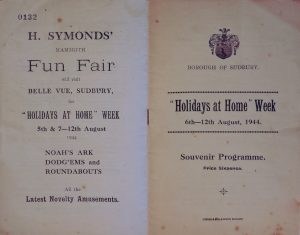 In 1944 when it was difficult to travel away from home the government tried to promote a scheme called “Holidays at Home Week”. There is a souvenir programme held by the archive outlining the provision made in Sudbury for this week (6th-12th August 1944). The programme cost 6d (sixpence) and each one had a lucky number on the back cover. Some of the activities involved an entrance fee and the money remaining after expenses had been taken from Monday’s events was divided between the Lord Lieutenant’s Suffolk Prisoners of War Fund and St Leonard’s Hospital. The surplus money from the remainder of the week was donated to the The Lord Lieutenant’s Suffolk Prisoners of War fund. 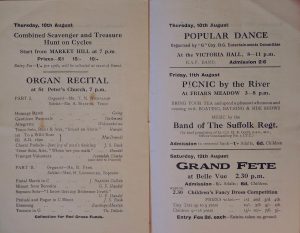 There have been many Festivals, Regattas and Fetes organised in Sudbury and many programmes are held by the archive. Today we have the Food and Drink Festival held in June and the Carnival has been revived again and takes place in August. Many such events are devised to raise money for new public ventures. The Donkey Derby at Belle Vue park in the 1960’s was  a fund raising event for  the Riverside Walk appeal. 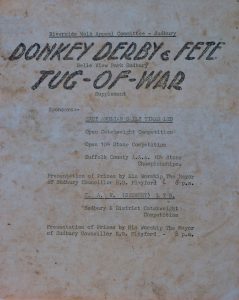 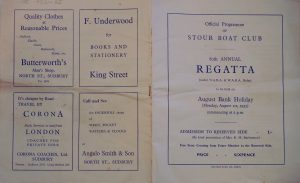 What can we find out from a receipt? (Featured Acquisition June 2016)

The indenture of Henry Brackett, 6th July 1844 (Featured Acquisition May 2016)