A common cry in any community is “There is nothing to do”. In Sudbury one doesn’t have to look very hard to find a variety of social gatherings. These clubs and societies range from sport to craft, education and groups connected with the local Christian Community. Some are pro-active, working for the good of the community, whilst others are providing an opportunity for the members to develop their individual interests with people who have similar interests.

Christmas is a time for more indoor pursuits and the Sudbury Dramatic Society has traditionally put on a performance of a pantomime, thus giving pleasure to those who have spent weeks rehearsing and preparing the set. 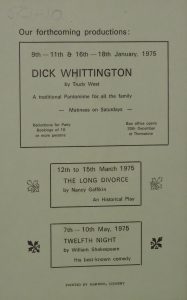 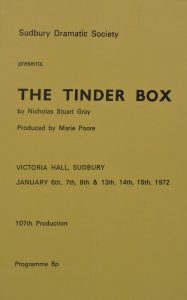 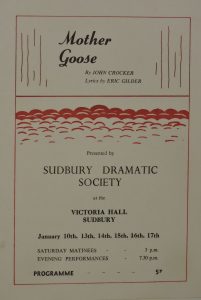 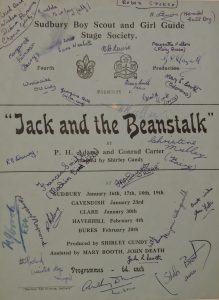 In the archive we have many programmes of past pantomimes, not only those performed by the Sudbury Dramatic Society but also the Sudbury Boy Scouts and Girl Guides Stage Production Society. 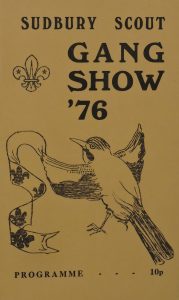 For the last group we have a couple of signed programmes for productions in 1951 and 52. Also in the collection are programmes from other productions done by the Sudbury Dramatic Society at the Victoria Hall in Princes Street as well as the later ones at the Quay Theatre.

A visitor gave us some photocopies of early programmes or SDS in the 1920’s and 30’s with copies of the newspaper reviews for the plays too. It can be interesting to discover that our ancestors were spending their spare time involved in various dramatic activities and programmes provide names of performers.

Sudbury Rotarians will once again be sponsoring the Christmas Tree display by local clubs and businesses, in St Peter’s Church, a magical experience and compared with the pantomime a more recent annual event but the programme which we retain each year in the archive box for Town Events gives an idea of the work of the local Rotarians and the way the group sets about raising funds to help others. The list of participants gives the researchers an idea of the clubs available as well as commercial sponsors in Sudbury. 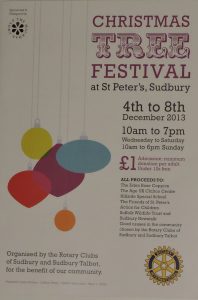 Sporting groups are always popular and amongst the Ephemera Archive we have the minute book for the Sudbury Badminton Club that met weekly until the outbreak of the Second World War and resumed after the war when many of the men and women returned from military service. It is fascinating to read how members were enrolled in the group after the committee had discussed whether they would allow them to join the club. The record also gives a list of the members and the cost for hiring the hall where they played.

Since the 2012 Olympics and the success of the British Cycling Team in international events the Sudbury Cycle Club has increased in popularity and the colour brochure is an example of the clubs progress. 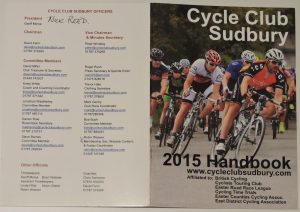 For the less physically active there are groups like the Sudbury Model Railway Club. This club meets weekly but has a major exhibition in St Peter’s Church in October and invites clubs from other parts of the country to join them exhibiting working layouts. The Model Railway Cub hosts their visitors and makes sure they are well fed before returning home and the menu’s these people are offered are also part of the archive telling the story behind eating houses and their menus. 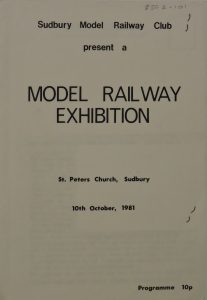