Property Deeds were sometimes written on parchment and as land has become registered under the Land Registry these beautiful handwritten documents have been often discarded. Some parchment deeds have turned up as lampshades or framed as something to admire.

Many Deeds used to be kept by the mortgage company until the mortgage was fully paid and then the owner of the property would either store the documents in the bank or at their solicitors.

Sudbury has many old timber framed properties and even those built in the late 19th century have deeds which will tell a vital part of the town’s history.

Sudbury Ephemera Archive has recently been given the opportunity to copy some deeds for houses built by a local builder – they not only provide details about the builder and his business just along the road, but also some information about the Workhouse gardens.

Sudbury Ephemera Archive was fortunate enough to see the deeds (both on vellum and typed papers) for Belle Vue house and they also described the breaking up of the land so that other houses could be built along Newton Road. They detailed when electricity was put into the house, the names of the previous owners and the value of the house at the time of each sale. One sale took place with the Red Cross occupying the house and it was written into the terms that when the Red Cross no longer needed the house then it would be sold and the money from the sale would be given to the Suffolk branch of the Red Cross. One sale of this property gives an inventory of the grounds and lists a car and registration of the vehicle left in the stables.

Some deeds include letters about the property and the owner of a modern property brought the letters and plans for an extension to his bungalow, as well as the original building and furnishing of this home, in to Sudbury Ephemera Archive. What a fantastic social history about setting up home in the 20th century.

Last year Sudbury Ephemera Archive was indebted to the Freeman’s Trust who granted some money to enable some old deeds to be photographed (as they had an official seal and were so large they could not be photocopied). 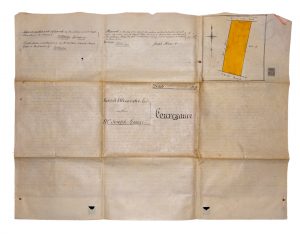 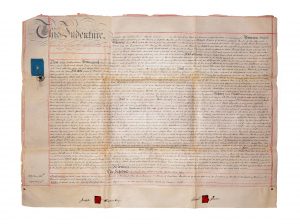 Now that many deeds are not treasured there is a great danger that the information they hold will be lost. Often these documents are given to the new owner of a property and stuffed in a draw. There is a danger they may be destroyed the next time the property is sold, instead of being passed on to the next owner for safe keeping. At which point, another slice of Sudbury’s social history is lost forever.