What can we find out from a receipt?

One receipt can provide a great stepping off point for a researcher. 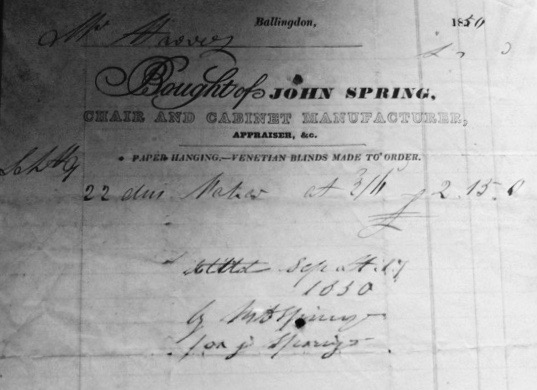 Receipts and invoices are often thrown away but some 19th and 20th century invoices are stored in the archive. For the genealogist these are fascinating as such a simple piece of paper can give insight into the business or purchase of ancestor and therefore the life style they might have lived. The above bill from the archive refers to business in Ballingdon Street belonging to John Spring a cabinet and chair manufacturer who also made venetian blinds and hung wallpaper. John was born about 1803 in Great Cornard. He was a master cabinetmaker and by 1841 employed 3 men, these employees are not listed as living in the Spring’s household. He married Maria who had been born in Boxted and they had a large family many of whom were daughters, all the children were born in Ballingdon so he seems to have settled there from about 1827. John died between 1851 and 1861 when his widow was left to run the business.

The unmarried female members of his family seem to have found employment in bonnet making, straw hat making laundress and as needlewomen. For many years the female members of the family who did not marry seem to have remained in the family house, 74 Ballingdon Street. Somehow these ladies appear to have managed to use their skills in millinery and needlework to enable them to have sufficient funds to live on their own means in later life. The sons do not seem to have followed in their father’s trade as Arthur is listed in later census as an apprentice butcher to his sister Maud Nice and later as a butcher. 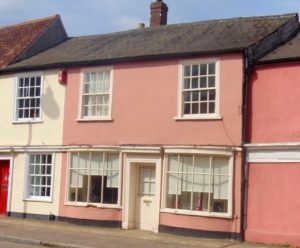 Today the property 74 Ballingdon Street is two doors away from Spring Cottage and in the 20th century was a dairy where there had been space for cattle to be brought from pasture on the meadows and milked before returning. Behind the dwelling was a mass of out buildings.

The purchaser was a Mr Harvey and it might be another line of research to follow or may be a member of the Harvey family knows of his purchases. There are three receipts in the archive for purchases made by Mr Harvey around this time. 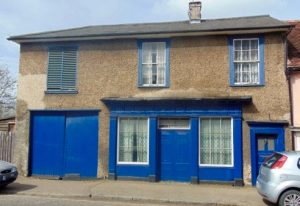 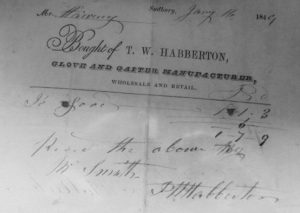 The 1844 White’s directory lists William Bass and Stephen Brown as both being Seed merchants of Sudbury Market Hill. In 1841 William Bass (50) was the corn merchant and Stephen Brown aged (30) a seed Merchant living at the same address. William bass does not appear in later census returns. The 1851 census shows Stephen was born in Hertfordshire and he employed 15 men. 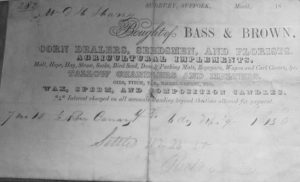 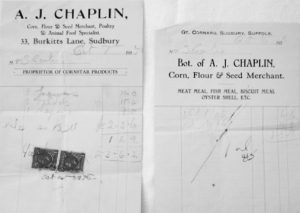 SEA has 2 receipts from AJ Chaplin, which provide the information about when the business was based at Burkitts Lane and then at Chaplin’s Corner, Great Cornard.

Note one of these receipts has the stamp attached as they are a remnant of the days when a tax called stamp duty was paid.

This receipt from Twitchetts cycle shop is a commercially printed paper with a space for the local dealer to print his name. 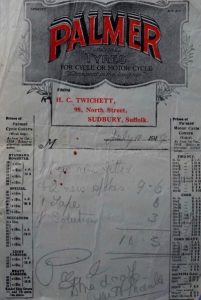 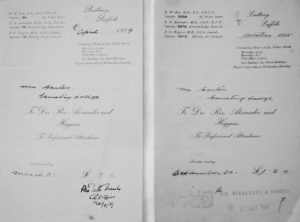 Before the days of the National Health Service, patients had to pay for consultations with the GP; here are examples of bills for Dr Rix attending a patient at the Cemetery Lodge Sudbury.