Sudbury Grammar School was founded in 1491 and ceased to exist in 1972 when the three-tiered educational system was established in West Suffolk. In 1972 the Christopher Lane building became All Saints Middle School for the school’s top two year groups and remained so for the following 15 years. In 1987 the middle school was re-homed in new buildings on the playing field in Acton Lane. The Headmaster’s house and the school in Christopher Lane were adapted for sheltered accommodation for the elderly. Today this building is called William Wood House, after the founder of the Grammar School.

In 1972 when the Grammar School closed the Middle School took students from age 10-14 for the first year and the following year took pupils from age 9 to 13 years old as intended by the restructuring of the system. Students finished their education under the three-tier system at Sudbury Upper School (now the Sudbury Ormiston Academy).

The Sudbury Grammar School Old Boys Association (SGSOBA) has held a remarkable archive of its own and in recent months has started to pass some report books and photographs to the Sudbury Ephemera Archive (SEA) for safe storage. 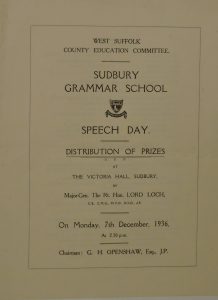 These photographs of the members of the school unfortunately do not have names attached to them and SEA welcome anyone who would like to come and spend some time listing the names of these boys. The annual photographs for the school go back to the 1920’s and it is interesting to see the uniform of the boys and dress of the few women involved with the school in those early years.
The photographs are very long and difficult to reproduce but below are two samples from the collection. 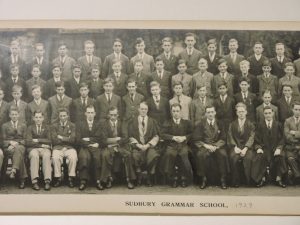 There was a cadet corps based at the Grammar School and in this month when we remember the men who gave their lives in two world wars it is important to remember that not only did Sudbury Grammar School lose students but also Captain Smylie, a teacher who (despite being too old for service) volunteered to go with his boys to serve at the Front and died in the early days of the offensive on the Somme in July 1916. SEA has an account of the visit made in the 1920’s to the World War 1 Battlefields where students had fought and died.

Sudbury Grammar School was one of the first schools to send pupils to Germany after the Second World War and in SEA has photographs of the boys leaving Sudbury Station for their visit. SEA also stores some of the photographs of the Cadet Corps.

The traditional Speech Day was part of the annual school events, with prizes being presented by a noted member of the community. SGSOBA is responsible today for providing some of the prizes presented at Ormiston Academy Prize Giving each year.

The SGSOBA has also worked closely with SEA to provide information about a Sudbury family following an enquiry earlier this year.