A sample of some of our retail archives 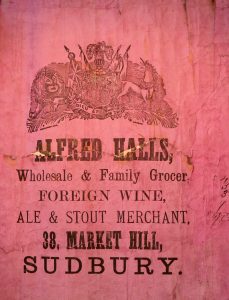 Shopping has changed a great deal in the last 70 years, In the 1950’s when very few families owned cars it was essential to be able to shop locally, when the local business could deliver heavy and bulky articles to the home. The population of Sudbury up until the 1970’s was too small to be of interest to some of the very large stores to consider it a viable proposition to open an outlet there. Shops were sited around the Market Hill, North Street, Friars Street, King Street, Gainsborough Street and a few in Station Road.

The archive holds receipts, adverts, catalogues and paper bags from many businesses. Even in the 1970’s there were independent sweet shops like the one at the corner of Gainsborough Street next to the HSBC bank. Next door to the sweet shop was the greengrocer, Mr Watson. The town centre had a further greengrocer in North Street and two fishmongers.

People did not have to visit large stores on the outskirts of Colchester, Ipswich, Bury St Edmunds or Cambridge to buy furniture as Mr Palmer in Gainsborough Street was your local shop. Palmer’s also provided a means of paying by instalments as the photographs show. 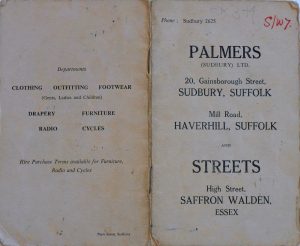 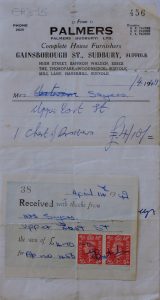 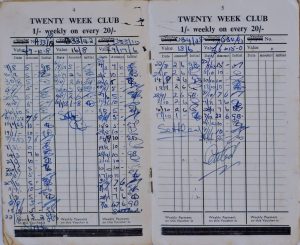 This was the era when there were still local suppliers of radios and televisions, like Mr Watt’s in Station Road and Dawson’s on Market Hill. If you bought or rented a television from one of these shops, then they would also repair it if it broke down.

There was not just one furniture store in the town but two providing choice and competition for the consumer. SEA has quite a few archives from the Alston shops, one being this bag. 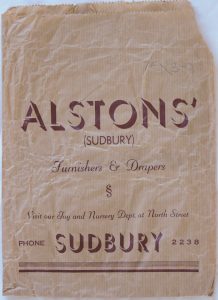 Another specialist shop was in Gainsborough Street, where Mr Arthey sold and repaired sewing machines. The shop was in the front room of the house but when the customer went in for needles, or cotton, to buy or just seek advice both Mr and Mrs Arthey were able to provide the appropriate information. 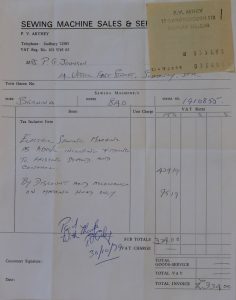 The newspaper shop in Friars Street today was known as Fairhead’s and the owners today are the woman who used to be his assistant, and her husband. The counter was laid out with all the magazines on show and in case the electricity failed the gas mantle still hung above the counter. Besides papers, comics and magazines the shop sold cigarettes, sweets and snuff (the latter was weighed out on the balance scales and served in a cone paper bag). 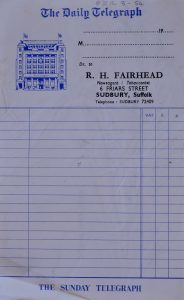 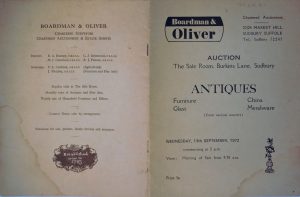 Not all businesses on Market Hill were retail shops, an example being Boardman and Oliver Estate Agents. They were also auctioneers for the cattle market and on Thursday afternoon after the cattle sale there was a dead stock market. This provided people with the opportunity to purchase second-hand items of household use or furniture at reasonable prices. Once a month there was a specialist auction of antiques – a catalogue was produced and the sale was frequented by antique dealers. Today the unit is still an estate agent but is part of the national William Brown Group. 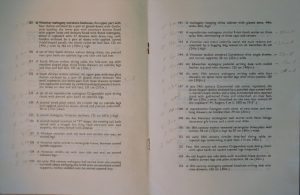 Now the shopping centre has fewer private businesses and several national chain stores. Many shops are charity outlets or coffee shops. There is still the family run store Winch and Blatch which is Sudbury’s department store. 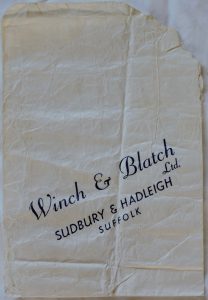 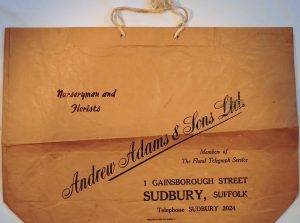 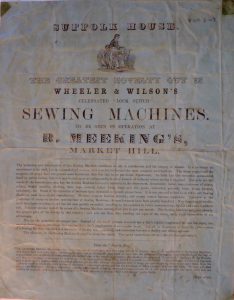 The retail world is still changing and now a lot of shopping is done via the internet and delivered to the customer’s home.