A year ago the major news item was the terrific fire that destroyed houses and commercial premises at the west end of the Sudbury Market Hill. Prior to this event the Sudbury Ephemera Archive received a donation of some scrapbooks containing cuttings from newspapers of various fires that had caused damage or complete destruction of properties in Sudbury. 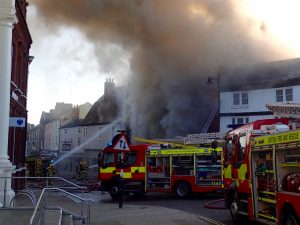 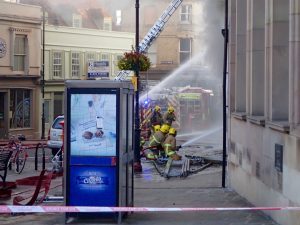 Although the car parks were full on the Sunday night in September last year when the fire took place many people preferred to stay at home and watch the events unfold on social media. 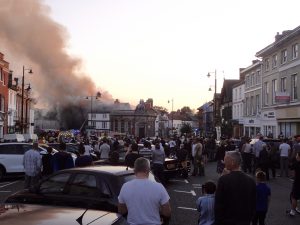 As Recorders of presents day events that take place in the town we collected a file of our own showing the consequences of the 2015 fire, the actions taken by the Town Council to help those made homeless and the businesses to relocate.

Over the decades there have been many fires in Sudbury and unfortunately the structure of many buildings are and were fundamentally timber therefore one fire can threaten the loss of many properties and when the town centre is threatened crowds gather to watch the catastrophe unfold.

In 1955 at midnight there was a fire at Walnuttree Hospital, when the fire broke out there were some male patients trapped on the upper floor, these men were successfully rescued. The hospital, the former Union Workhouse had recently been taken over by the newly established Local Health Authority had no provision for fire escapes. Thanks to the nurses from the nurses’ home at Stour House, PC Seagull and local residents the patients were safely rescued from the fire (a detailed description can be found in Beyond the Bricks of Walnuttree Hospital Sudbury by Phyllis Felton). 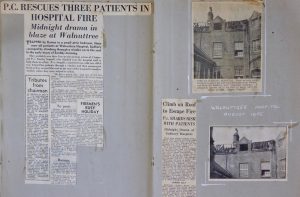 Sudbury has many timber framed buildings although the outward appearance is that most buildings are brick many had a facelift for one of Queen Victoria’s Jubilees. The scrap books show the fires in North Street, when Alston’s was destroyed, then the fire next door to the Town Hall where papers left on a storage heater ignited destroying a carpet shop at the corner of Gaol Lane, the shop once occupied by Dawson’s the electrical shop selling radios and televisions.

Often the void left after a fire is filled by a completely different business and building design for example the space near the garage in Cross Street, and the shop built to replace the burnt Rose and Crown hotel opposite the south  side of St Peter’s Church.

The Four Swans in North Street is another hotel burnt and replaced by shops, although the façade of the new buildings is not dissimilar to that of the old hotel. When Woolworth’s was burnt not only did the townsfolk stand to watch but also they benefitted from the sale of fire-damaged stock afterwards.

One cutting tells of a fire in Cross Street in the 1960’s when an old lady burnt to death. Bambi Coffee Bar in North Street (featured on the same page of the scrapbook) was popular with teenagers, but was gutted by fire in October 1960. 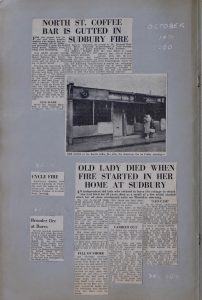 If one walks towards the Croft via Acton Square and then walks along the side of the Waggon and Horses Public House there is a wall now covered with foliage, usually there is a gap left in the foliage to show an engraved stone commemorating a 19th century fire on that site.

In the archive and Heritage centre there are documents relating to the fire at the Rose and Crown, and the Zeppelin Raids of the First World War.

The scrapbooks will be on display in the Town Hall on Saturday 10th September 2016 for Heritage Day. It will also be possible to view the local Nuisance Books from the late 19th and early 20th century.