Until the mid 1950’s there was a large chapel in Friars Street – the Friars Street Independent Chapel, which had a very large seating capacity and had been the place of worship for many of the leading 18th century families of Sudbury. One such family was that of the local painter Thomas Gainsborough. The law in the eighteenth century made it compulsory for people holding public office in the town to be communicants in the Anglican Church and for this reason many of the prominent members of the Sudbury community were associated with the Independent chapel and also All Saints Church, which was regarded as low church.

In the early 19th century the Family Gainsborough was dissatisfied with the Friars Street Independent Chapel and  began a breakaway group, which gave rise to the Trinity Chapel in School Street. The chapel was given the nickname ‘Spite Chapel’ due to the reasons behind its foundation. Like Friars Street there was a burial ground within the grounds of the chapel. 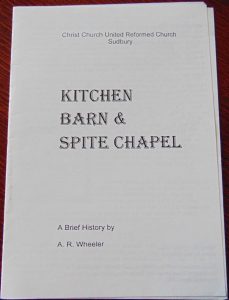 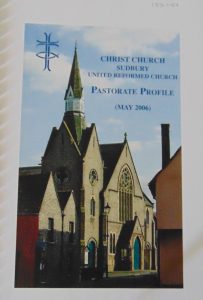 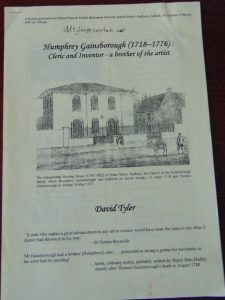 During the First World War (May 1916) Sergeant Butcher married local girl Susannah Macro at Trinity Chapel and the convalescent soldiers at the Belle Vue Red Cross Hospital came to the chapel to form the guard of honour using their crutches and sticks. Sergeant Butcher’s best man was a Canadian also recovering at the hospital. In the vestibule of the chapel stand two War Memorials, one from Friars Street Chapel and the other from Trinity Chapel. 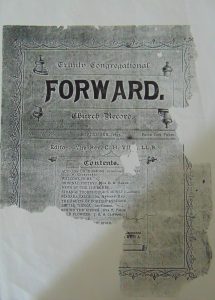 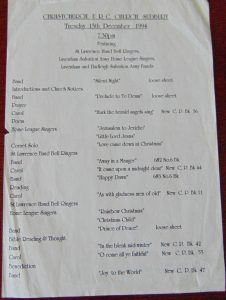 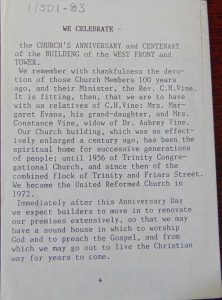 During the 20th century the congregation met for both Sunday morning and Sunday evening services. There was a Sunday School, later known as Junior Church and during the week a well supported Women’s Fellowship and Thursday evening meetings, when visiting speakers might talk about visits to foreign countries and show slides. There was an annual Christmas Fair and summer Flower Festival. Special Sundays were designated for the Women’s fellowship, Church Anniversary and other groups to invite guest preachers. The church also supported the Missionary Society by fund raising. 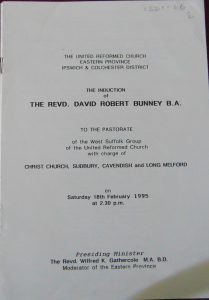 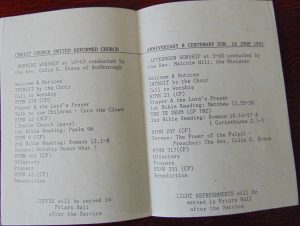 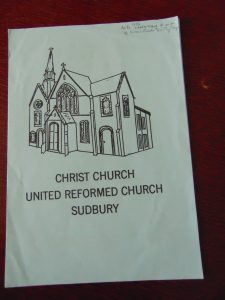 Every October on the Monday evening after the Harvest Festival weekend when the church was decorated with produce and flowers, members and friends gathered for the auction of the produce brought to the chapel to celebrate and gives thanks for the harvest. For events like this tickets were sold and any tickets people still have would be a welcome addition to the archive.

The archive would be delighted to have examples of any special order of services people might have to include in the ephemera collection. One such example is any service sheets for the induction of ministers, this was the first church in the town to have a female minister, when the Rev. Margaret Taylor was appointed as the leader of the congregation.

There were many musical groups formed in Sudbury and some of these performed at Christchurch. The hall has been used by various groups to hold meetings, including Weight Watchers, Toy Library and Sudbury Society.

The official records of the two chapels (including the one with the record of Thomas Gainsborough’s baptism) are held in the Bury St Edmunds County Archive Office but the Sudbury Ephemera Archive holds many items providing evidence of how this Christian Fellowship has contributed to the local social development of Sudbury.

Due to declining membership attendance at this chapel it is likely to close at the end of this year.