Local and national elections generate many pages of publicity fliers from candidates, most of these will be sent to the refuse bin after the polling day. Many hours are spent on the television news, and on the night of polling day agonising over the results.  Sudbury has a claim to fame regarding elections as it not only had two clubs known as The Eatanswill Club during the last century but it is considered to be the town Charles Dickens based Eatanswill on for Pickwick Papers. There is an illustration from August 1836 of The Election at Eatanswill by Phiz (Hablot K. Browne) that appeared in an edition of Dickens’s Pickwick Papers.

The SEA has begun to collect some of the canvasing papers from recent elections but it also holds copies of spoof posters from the 19th century elections.

Within days of the 2017 ‘snap’ General Election being announced, SEA received a donation of  election posters from the 1945 election. These make interesting reading because of the offers being made by the candidates, with the Labour party promising the prospect of a better future for the soldiers and their families as peace unfolded 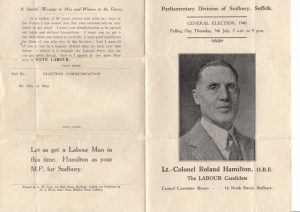 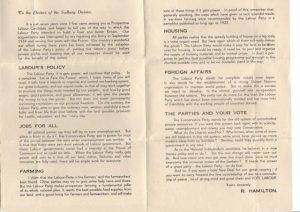 The Liberal candidate was a woman from Bures and a member of a leading local family. She was appealing particularly to the female voter, who has not had the right to vote for very long. The Liberals were promising better sanitation and living conditions as well as independent status under the social benefit scheme (the National Insurance scheme was yet to be introduced). 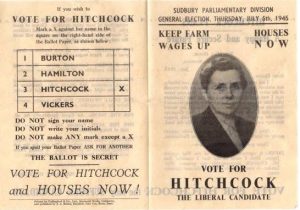 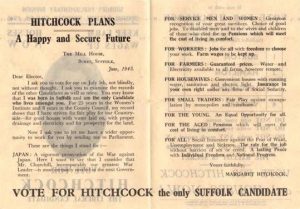 The Conservative candidate based his appeal on the name of the victorious wartime Prime Minister, Winston Churchill and what must be done to return men and women to a peacetime civilian life and resettle the country. 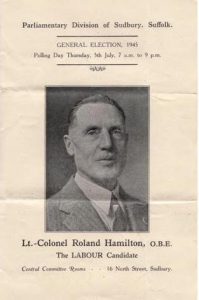 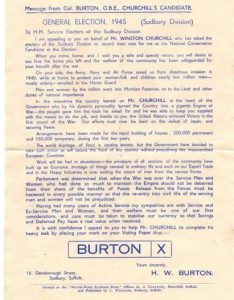 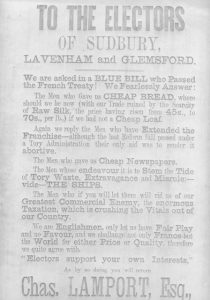 We also learn that the Labour Party had a base in North Street (looking at the number it was somewhere near the current location of the Sue Ryder Shop). The Conservative candidate was based at 16 Gainsborough Street.

SEA is always pleased to help researchers looking into either the Eatanswill clubs or past elections, local or national polls.