Sudbury Mayor Robert Spivey gave the Welcome Address, followed by the Chairman of the British Legion, Mr Stuart Hume who read the Tribute.  Mr Len Manning then read the Exaltation 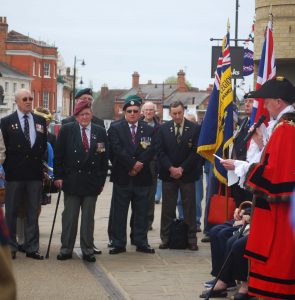 Also participating was Gainsborough WI who gallantly laid on tea and cakes while the Ukulele band ‘The Institukes’ played songs of the period.

As was in keeping with 1945 St Peter’s church bells rang out a 20 minute peal, thanks to a band of 10 bell ringers. The Church bells had not pealed during the duration of the conflict.

We were privileged to be joined by an Artic Convoy survivor, Mr Len Backhouse and four veterans from Catchpole Court, as well as Maureen Mann who had been an evacuee to Suffolk 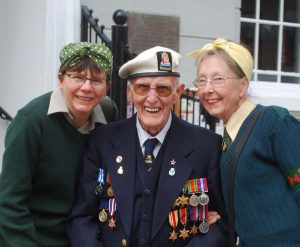 Some Sudbury Shop staff were able to join the Silence outside their individual premises.

Following on from the afternoon events

at 9.15pm the crowd gathered on The Croft to light the Beacon

Robert Spivey read from Winston Churchill’s speech, followed by the Tribute and the Exaltation,

The Mayor was helped to light the Beacon by Tom Welsh and the young winner of the SFP competion.

After which the Reverend Simon Gill led the Prayers.

Len proved that you can not keep and old soldier down!

A great time was had by all!

Sudbury Ephemera Archive would like to thank all who took part and those that just came to watch.

Our stand was set up on the Friday night amidst a site which was a hive of industry and a buzz of anticipation for the weekend to come. 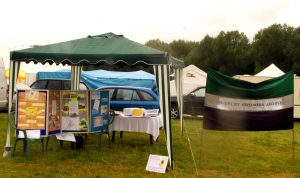 SEA was present on the Sunday rather than both the days.  When we arrived on the Sunday a number of other exhibitors had admitted defeat in the face of the persistant rain and packed up.  Stands with any thing in paper or boxes were struggling to keep things dry.

Our pitch had a ringside view of the Second ring which kept us amused throughout the day.  We had displays from Hawks, motor bikes, mountain bikes , a Youth band, sheepdogs and model tractors.

We had a slow start but managed to chat to a wide variety of people who had varied interests in Sudbury and what we are doing to preserve its heritage in paper.

Sudbury Ephemera Archive took a stand at the colourful vintage rally held by the Monks Eleigh Bygones Collectors Club This annual event was held on 14th and 15th June 2014 Sudbury Ephemera Archive revealed their new Gazebo, kindly donated to them last year as a result of an appeal on the Lesley Dolphin BBC Radio Suffolk show and together with the table also donated from the appeal set up a stand at the Rally. 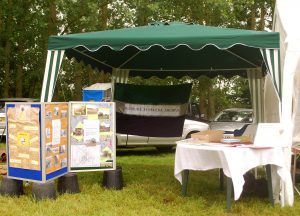 The weather wasn’t too kind to begin with on the Saturday, a steady heavy drizzle fell till mid morning when the events in the main ring got underway. But there was certainly plenty of stands to look at:

A collection of ‘state of the art’ garden tools!

The Sudbury Ephemera Archive made its first public appearance early in the year at the SUDBURY ON SHOW event sponsored by the Town Council. Our next event was thanks to the generosity of Gainsborough’s House when they allowed SEA to hi-jack their celebrations to commemorate the 100th anniversary of the unveiling of the Thomas Gainsborough statue outside St Peter’s Church on Market Hill.

As in keeping with the time of the original event on 10th June 1913, SEA members aided and abetted by members of the Suffolk Family History Society, burst from St Peter’s Church with a noisy protest for the Suffragette Movement.  Each member was wearing a black armband to acknowledge the recent (in 1913) death of fellow Suffragette Emily Wilding Davison who had died after being knocked over by the Kings horse during the Epsom Derby just days before.

After the initial surprise the audience and dignitaries seemed to enjoy the noisy interruption. The ‘Suffragettes’ certainly enjoyed the event and are working on their next escapade………..

So watch out Sudbury! The next outing for SEA was at the Monks Eleigh Bygones Weekend held on the Great Waldingfield Airfield on the 15th and 16th June.

Despite the deluge of rain during the Sunday afternoon it was a productive afternoon and well worth the borrowing of a gazebo and display boards. Since then SEA made an appeal on the Lesley Dolphin slot on BBC Radio Suffolk, and thanks to the generosity of the listeners now has its own gazebo and table.  If anyone has any unwanted gazebo sides they would be gratefully received! Following this success, SEA was  invited to take a pitch at the Long Melford Vintage Rally held on 6th and 7th July.  SEA opted to be there on the Sunday, when fortunately, the weather was much kinder.  Once again it was felt that the day was very productive.

Many people remarked that they had ‘stuff’ in their attics that they felt SEA might appreciate. One gentleman was delighted to discover that SEA had already been given some of his family’s company paperwork as dating back to 1930s. SEA’s twice monthly open sessions (every 2nd Monday am and the last Wednesday pm) in the Town Hall continue to bring in a varied selection of archive material.  Anyone is welcome to pop in during these sessions, even if it is just out of curiosity to see what we get up to. SEA is always looking for new recruits, so even if you could do only one of the sessions in a month we would be delighted to see you.  We are a diverse group of people ranging from newcomers to Sudbury to those who have lived here all their lives.