December is when local groups often have celebrations of achievements within the group, pantomimes, concerts, carol services and such like. Our local Council have arranged many community initiatives not only this year, but in previous years too.

This year we have had celebrations such as Party in the Park, Sudbury Carnival, Delphi fireworks and a tremendous effort for the Centenary of the end of the First World War.

Sudbury Ephemera Archive holds many programmes for community events held during the twentieth and twenty-first centuries. Some are just posters like the one for the 350th anniversary of the Book of Common Prayer. Fortunately this one includes the full date and year, many unfortunately only publicise the date and month. 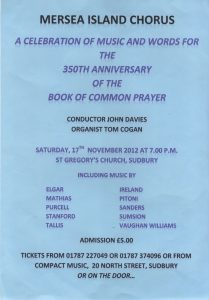 There is a full script available for the 1911 pageant held on Friars Meadow for the coronation of King George V. The booklet includes a list of all the members of the committee and various sub-committees responsible for arranging the pageant, and at the back is a list of groups taking part in the procession. Perhaps someday a member of the community might wish to reproduce this event, who knows? 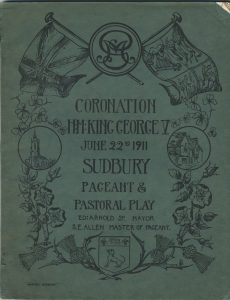 In 1954 the Borough of Sudbury celebrated the 400th Anniversary of the Royal Charter and to commemorate this a production of Merrie England was performed in Belle Vue Park. On the back page of the programme is a crossword which could be solved and sent to an address in Bury St Edmunds and the first correct solution received by Miss Strickland, Boyne House, Bury St Edmunds, would be awarded a book token. 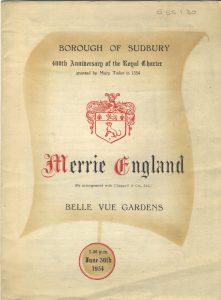 The printed material about the Gainsborough bicentenary was not a programme but a book about the artist’s birth town. 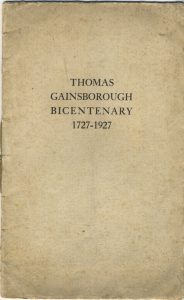 If anyone has examples of any other Sudbury Commemorative booklets or menus, the Sudbury Ephemera Archive would be delighted to add them to the collection.